This lovely wrap visited us some 10 months ago. Unfortunately I didn’t get to publish the review until now. Now I finally got the time to edit the text I wrote and choose a few pictures. Disclaimer: I did not have skis on my feet nor do I recommend anyone to have that while babywearing.

First encounter:
How I love this pattern! It’s one of my favourites, really. Ginkgo Biloba, the only remnant of a group of really early trees. They’ve actually found 270 million years old fossils of this old three, but its heydays were a little later during dinosaur times. As a wild tree, it’s extinct today. There are separate male and female trees, but they generally don’t plant female trees because the fruit smells terrible. Lovaloom and Minako also use Ginkgo Biloba leaves as pattern inspiration, but Levate really has their own take on it. It’s little more abstract due to both size and transparency. It’s designed by the young Danish textile designer Maria Rokkedah, woven in UK and hemmed in Denmark. More botanical inspiration; the herbal flower Echinacea inspires the colour of Echina. It’s such a lush and warm soft pink paired with ecru, which may look good with a lot of different skin tones, even my winter skin!

Wrapping Qualities:
It arrived here in loom state and I was worried that I had to work a lot with it to like it. But no, after wash and ironing it was already floppy and moldable. It’s soft and sleek and almost silky to touch. Still, it could be that my toddler broke it in rather rapidly and my experience with heavier wraps has cluttered my vision.
I used this wrap in variations of Double Hammock and Front Wrap Cross Carry. I also wrapped a Ruck Tied Tibetian on my man. It was a breeze to wrap with, thin in hand and with more glide than grip. It created an effortless Double Hammock. It’s such a gift when you’re busy in the morning or if you have a toddler that might change his mind about being wrapped while you’re wrapping. 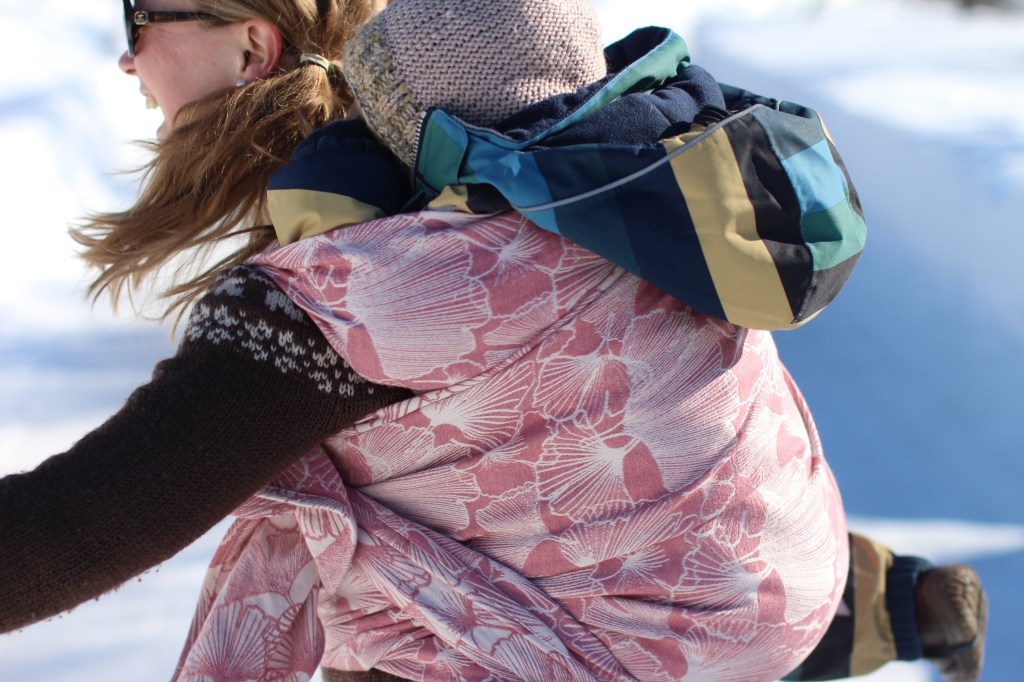 It has a subtle cush and it’s rather low in the stretch department. It’s not completely mute, but I’m not sure you’ll feel bounce or stretch in it until your kid is heavy enough. I think the pattern adds to the floppiness; if you’re familiar with Linuschka Owls, Lollik Vinger, Minako Ursus or Oscha Zorro you know what I mean. The pattern gives the fabric guidance to yield before it’s completely broken in. Very clever!
As briefly mentioned it has a smooth and cosy surface. You’ll have no trouble wrapping on naked skin and you’ll have to be very wool sensitive to have a reaction to it. I would wrap my kid in it without clothes without any hesitation and that can’t be said about all wraps. It’s densely woven which means it’s not bulky either to wrap with or to bring around. Also, it doesn’t get pulls very easily.

As lovely as this wrap is, it’s not for everyone. For me personally, the downside is the lack of grip. It doesn’t bother me in a Double Hammock, but in a Front Wrap Cross Carry I feel like I’m slipping while wrapping. Probably because I’m used to more grip, to keep the passes from slipping. To seal the deal you will need a double knot. Also, at this stage of wrapping, with a +15 kg kid it’s not the thin in hand wraps that wow me anymore. They work just fine, no doubt about that. I just prefer thicker and cushier wraps with a little bounce. Though, with use the wool will fluff up and maybe I will get hooked in our next encounter? And with a big baby or smaller toddler, you probably won’t share my opinion.
If your baby outgrown the elastic wrap and you’re curious for a woven wrap that will last a long time, this is a great choice. I’d say this is super for a beginner. Also, It’s great for a more experienced wrapper, and it’s perfect for practicing new skills.

Who would love this:
• Those looking for an easy wrap job
• Lovers of densely woven wraps that are thin in hand
• Team pink
Who would be more lukewarm to this:
• Someone looking for easy care wraps
• Those who prefer thick wraps with lots cush
• Grip-lovers

Thank you Levate; Hansotto Kristiansen and Nina Feldthaus for sending this wrap to for testing. It was a blast and I love to expand my wrapsperience :*
Do you love it? It is still possible to buy at https://www.levatewraps.com/shop/

In this space you will be indulged in everything babywearing, thoughts and geekery <3
%d bloggers like this: